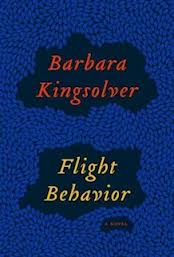 A few weeks ago I posted the opening paragraph of Barbara Kingsolver's recent release, Flight Behavior. Here it is again in case you missed the post:

"A certain feeling comes from throwing your good life away, and it is one part rapture.  Or so it seemed for now, to a woman with flame-colored hair who marched uphill to meet her demise.  Innocence was no part of this.  She knew her own recklessness and marveled, really, at how one hard little flint of thrill could outweigh the pillowy, suffocating aftermath of a long disgrace.  The shame and loss would infect her children too, that was the worst of it, in a town where everyone knew them.. Even the teenage cashiers at the grocery would take an edge with her after this, clicking painted fingernails on the counter while she wrote her check, eying the oatmeal and frozen peas of an unhinged family and exchanging looks with the bag boy: She's that one.  How they admired their own steadfast lives.  Right up to the day when hope in all its versions went out of stock, including the crummy discount brands, and the heart had just one instruction left: run.  Like a hunted animal, or a racehorse, winning or losing felt exactly alike at this stage, with the same coursing of blood and shortness of breath.  She smoked too much, that was another mortification to throw in with the others.  But she had cast her lot.  Plenty of people took this way out, looking future damage in the eye and naming it something else.  Now it was her turn.  She could claim the tightness in her chest and call it bliss, rather than the same breathlessness she could be feeling at home right now while toting a heavy laundry basket, behaving like a sensible mother of two."

Where does this intro lead? It sets the stage and propels the reader into an engaging story about science, climate change morals and Christian values.

Dellarobia (Dell) Turnbow, is a confused wife and mother. Pregnant and married at 17 to "Cub", son of "Bear"; her in-laws live too close for comfort. She adores her children, but wants more out of life than what their sheep farm in the middle of nowhere - Appalachia can give them.  Money is tight, Dell longs for knowledge and often dreams of taking "flight".  As a diversion from her humdrum life, she has a tryst planned with the telephone repairman.

On the day she climbs the mountainside on her way to commit adultery, something incredible happens when she gets to the top. All of treetops appear to be ablaze in a brilliant shade of orange. Since she does have her glasses with her for vanity purposes, she doesn't realize until later that it wasn't a fire at all, but a massive migration of Monarch butterflies, the same butterflies that normally migrate to Mexico not Tennessee.

The arrival of the butterflies and the science surrounding their migration are at the center of the story. Pitting scientists using climate change and global warming, against Christians who believe that a miracle has occurred.  In the process Dell's focus changes to working closely with the patient environmentalist who was sent to investigate what has occurred. She tries to convince others to see things her way, urging her in-laws to rethink their plans to sell logging rights to the mountain.

As with The Poisonwood Bible, a favorite of mine, Flight Behavior focuses on moral dilemmas, has finely drawn and yet colorful characters. The Environmentalist for example, although well educated, he has no clue what life is like for the people in Appalachia, and his conversations, especially with Dell are both serious and yet laughable. I liked this novel an a lot, especially the transformation or rather metamorphosis that occurs for Dell as she learns about climate change.  This was a great story, but perhaps a bit too long.
Posted by (Diane) Bibliophile By the Sea at 7:03 PM