The Cure for Grief; Nellie Hermann 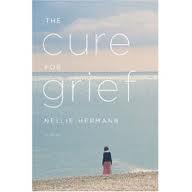 I introduced this novel on my Tuesday "First Paragraph" segment a little over a week ago, and many of you thought by the intro something bad seemed likely to happen. Here it is again...


"Ruby Bronstein was nine years old the winter she found a gun.  It was a Tuesday in December; she and her family were on vacation in Maine.

That morning, after breakfast, Ruby stood by the window of the closed-in side porch, watching her brothers.  They were far out on the beach, moving across the expanse in front of the house and then stopping; a cluster of dark, stop-and-go bodies like raised, mobile moles on the pure flat of high tide."

What happens is not exactly what I suspected, but that paragraph certainly set the tone for the majority of what follows.

Ruby is the youngest child of four, and the only girl.  She's smart, acts older than her years and adores her older brothers and wants to be a part of what they do, despite the teasing she often endures.  Her father is strict and quiet, and is a Holocaust survivor.  It isn't until Ruby is a young teen that she begins to understand what her father lived through as the family travels to Prague, and returns to the internment camp where the father was imprisoned.

Some families have more than their share of tragedy, and when one of Ruby's brother's is hospitalized and initially diagnosed with schizophrenia, the family's faith is tested. Ruby is taught early on to keep much of her home life private, but this incident with her brother will be the first of a series of tragedies that she must learn to cope with. Despite this she tries to act like a normal young teen, at least publicly -- she attends camp, experiences the first stirrings of love, but at times her anger at God comes out, when she thinks about just how much the family has been through.

So as I'm sure you've gathered, this is not an uplifting story, but it's well written, and as a reader, I found it engaging and it was easy to feel for Ruby and her family.  I was surprised to read that this was a debut novel and at least in part autobiographical.  The story is a real testament to the power to heal the heart, make peace with the past and go on with life.
Posted by (Diane) Bibliophile By the Sea at 6:39 PM