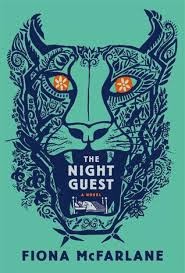 Ruth Field is a 75-year-old widow living in a coastal town in Australia. She has two sons who telephone her regularly, and she seems to be doing fairly well living alone with her cats. One night Ruth wakes up to what sounds like a large cat --not her cats-- something much bigger. She thinks that there must be a tiger in her house. She lies still and does nothing, but she is sure about what she hears. The next morning all seems well, but while Ruth is in her garden a stranger, a woman with suitcase, appears from the area of the dunes.  She tells Ruth that her name is Frida Young, and that she has been sent by the government as a care giver to help Ruth around the house. Ruth does not seem suspicious of this woman or of this strange turn of events. She accepts what Frida says and allows her into her home.

It's at this point that serious red flags appeared for me -- first the tiger, now this stranger who appears out of no where. The more time Ruth, spends around Frida, the more fuzzy her memory seems to become. Bit by bit Ruth is beginning to live in the past, thinking about her childhood in Fiji and a man named Richard that she once loved.  It's hard to tell what is real or imagined, but the reader knows that something isn't right.  It seems unlikely that care giving is the real reason Frida has shown up at Ruth's home. Since Ruth’s sons Jeffrey and Phillip do not live close by, Frida is able to make Ruth dependent on her and to manipulate her in the process.

The Night Guest made me open my eyes to the subject of loneliness and the plight of some elderly living alone. The story had all of the elements that I love in a novel: well drawn, believable characters, a story that moved at a good pace, and even though I  disliked Frida, I really liked the story.  I was so impressed to read that this is the author's first novel, I can't recommend it highly enough. I will be looking for more books by this talented young author in the future.

(review copy received through Amazon Vine)
Posted by (Diane) Bibliophile By the Sea at 6:00 AM