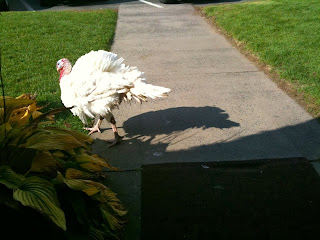 (Just over a week to make his escape)

Hi Everyone - Can you believe many of us will be celebrating Thanksgiving in less than 2 weeks?  With Thanksgiving coming later this year, Christmas and New Year's will be right around the corner and in some ways it's overwhelming, and in other ways exciting. I'll be hosting Thanksgiving once again, but I enjoy doing that and DH loves being able to stay home and watch some football as well, and then of course there are the benefits of the leftovers as well.  We have the day after Thanksgiving off so it makes for a great long weekend. NO Black Friday shopping for me, if fact, I stay indoors -- far away from the maddening crowds that day.  It'll be just 6 adults and a sweet 19 month old......but.....guess what?......next year we will have (2) more tiny ones to the Thankful for!!!  Yes....my granddaughter will big a big sister in early April to "little sister", and just as exciting, my son and his wife are expecting their FIRST BABY in early July.  I can hardly believe I'll be a grandmother to 3 in just over 2 years, when just a few years ago I never thought I'd be a grandparent. What are your Thanksgiving plans?

Book Stuff - It was a great reading week for me as I actually finished (3) books that I started over the past few weeks, and the good news was I enjoyed them all (but had a few issues with 2 of them - reviews coming).  I read:
Plans for this Week:
How was your week?

Posted by (Diane) Bibliophile By the Sea at 9:05 PM