The Signature of All Things; Elizabeth Gilbert 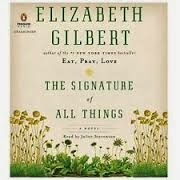 The Signature of All Things; Elizabeth Gilbert
Penguin Audio - 2013


I initially passed on this novel when it was first being pitched, but after reading several rave reviews, I decided to give it a try.  The audio version read by Juliet Stevenson was a treat to listen to. I caught myself smiling often and even chuckling at times while listening at work.

A historical novel which spans several continents ( Philadelphia, London, Peru, Tahiti and even Amsterdam), the research and detail was certainly impressive.

Alma Whittaker was born in 1800, the only living child born to a Dutch mother, Beatrice and British father, Henry. Her father made his money, traveling far and wide at an early age, importing exotic plants to America. Alma grew up on a vast estate, White Acres, in Philadelphia with strict parents of both wealth and intelligence. A rather plain looking girl, Alma grew up curious about life and with a passion for botany. Her parents push her to excel and moss is what eventually gets her excited, well moss and frequent trips to the binding closet once she realized how much she enjoyed spending time there -- you have to read the book to understand what makes Alma tick.

When it's pretty clear early on that potential suitors will not be pounding on Alma's door. She spends time and energy on botany research. When a younger man named Ambrose Pike visits White Acre, Alma finds herself attracted to him. Although they are very different -- he artistic and quite spiritual, the two do share a passion for plants. Ambrose is the creator of a collection of beautiful botanical lithographs. At 48, Alma marries Ambrose, but unfortunately, Alma's expectations for what her wedding night might be like doesn't pan out.  As a result, she feels humiliated and their sexless marriage is short-lived. Alma sends Ambrose off to Tahiti to work on one of her father's plantations. When Ambrose, dies unexpectedly, she's obsessed with finding out more about the real Ambrose. Traveling to Tahiti to learn more about the man she had married, and she has some sleuthing success but nearly drowns while in Tahiti in the process.

The novel is long, 500 pages and 16+ hours on audio. It was a bit slow at times, but it's full of interesting and fully fleshed characters and a few quirky ones as well.  Hanneke de Groot, Alma's former Governess was a favorite of mine; her advice and wisdom was refreshing. Her adopted sister Prudence was another character I respected and admired. Alma, of course was a piece of work, yet her character made the novel work so well.  Who would have though a story about a woman with a passion for moss could be so interesting and well written. So happy I spent time with this novel. READ IT!