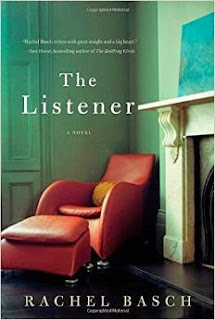 
Honestly, it was the cover art that initially attracted me to this novel, but then I read the first paragraph, and was immediately intrigued---

"She was a freshman, allergic to sulfa drugs and codeine.  She didn't wear corrective lenses and she didn't smoke.  She wasn't taking any medication.  She's checked yes for vitamin supplements and no for birth control.  At the bottom of the form on the line that read Other, she'd printed OTHER in big block letters".

Malcolm Dowd is a "Listener", a psychologist with a private practice as well as a counselor at Baxter College in Maine. His wife died unexpectedly, 14 years earlier and his children are grown and on their own. Although he's seeing a woman named Cara who teaches at Baxter, his life is still in flux. Malcolm has a secret about his deceased wife that even his children aren't aware of.

As the story opens, one of his Baxter students has arrived at the behavioral Health center for a counseling session.  Leah,  A.K.A. Noah, arrives and almost immediately sheds a blond wig and female attire to reveal freshman acting student Noah who is struggling with gender issues. Malcolm had spoken to Noah months earlier, and now this conflicted young patient of his will require even closer "listening" skills than ever.  The funny thing is that patient, Noah, at times seems to be a much better "listener" than the man whose help he has sought. One thing is certain though, by the end of the semester both individuals will help one another more than they ever expected.

This was an enjoyable novel. It's witty at times and the author know hows to get inside the heads of her characters to reveal their private pain. The characters are complex and dealing with difficult issues like gender issues, grief, parenting, loss and love. I think The Listener is a novel that will appeal to a variety of readers.