Every Tuesday I host First Chapter First Paragraph Tuesday Intros sharing the first paragraph, maybe two, of a book that I'm reading or plan to read soon. This pick is just 147 pages, but it's a translated work (German to English) so I'm just not sure how this will flow.) 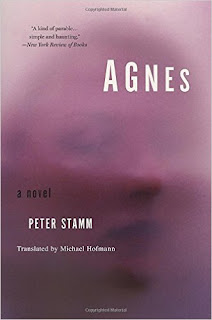 "Agnes is dead.  Killed by a story.  All that's left of her now is this story.  It begins on that day, nine months ago, when we first met in the Chicago Public Library.  It was cold when we first met.  It is generally cold in this city.  But it's colder now, and it's snowing. The snow is blowing across Lake Michigan, on the gale-force wind I can hear even through the soundproof glass in my picture windows.  It's snowing, but the snow won't settle, it gets picked up and whirled on its way, and only settles where the wind can't get at it.  I've switched off the light, and look out at the illuminated tips of the skyscrapers, at the American flag that gets tugged this way and that by the wind, in the beam of a searchlight, and at the empty streets far below, where, even now, in the middle of the night, the lights change from green to red and red to green, as though nothing had happened, or was happening."

Based on this intro, would you read more or pass on this book?


Feel free to join in by posting your own First Chapter First Paragraph Intro and linking below.