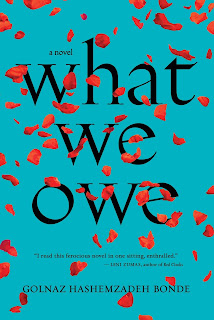 "I'VE ALWAYS CARRIED MY DEATH WITH ME. Perhaps saying so is trite, an observation the dying always make.  But I'm not like other people, in this as in everything else, or so I like to believe.  And, I do believe it, truly. I said as much when Masood died.  Our time was always borrowed. We weren't suppose to be alive.  We should have died in the revolution.  In its aftermath. In the war. But I was given thirty more years.  More than half my life.  It's a considerable length of time, something to be grateful for.  The same length of time, something to be grateful for.  The same length as my daughter's life. Yes, that's one way to see it.  I was allowed to create her.  But she didn't need me this long.  No one did. You think because you are a parent, you're needed.  It's not true.  People find a way to get by.  Who says I was worth more than the trouble I caused?  I don't believe it.  I'm not the type who gives more than I take.  I should be.  I'm a mother, after all.  It's my job to bear the weight, bear it for others. But I never have, not for anyone."

What do you think?  It's a translated work but, I decided to try this one after reading several favorable reviews. I'll be starting it this week.
Posted by (Diane) Bibliophile By the Sea at 12:00 AM