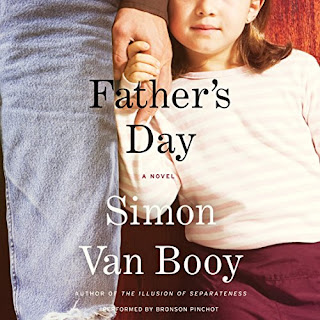 Father's Day; Simon Van Booy
Harper Audio  (2016) - 6 hours 57 minutes
(narrated by Bronson Pinchot-very good)
This book has been among my purchased audio downloads for several years so I decided to try it as Father's Day is just (3) weeks away.
Harvey was just six years old when her parents were killed in a car accident.  Her kind social worker, Wanda is desperate to keep her out of foster homes but, her only living relative is a disabled uncle named Jason who is has a violent criminal record.   Although the two have never met, Wanda sees something in Jason that makes her believe that having him as Harvey's guardian may be just what the other needs. At first Jason refuses as he isn't convinced that he can care for a young girl but, Wanda is persistent and finally he agrees as he can't stand the thought of her going into the foster care system. Harvey teaches Jason how to care and love and Jason begins to learn what being a father is all about and, eventually he is granted permanent custody of Harvey.
The story alternates from Harvey's past to the present as a 26 year old young woman living in Paris.  Jason comes to visit her and she presents him with a gift, a memory box, which triggers flashbacks to set the story in motion.  I liked the way Jason's big heartedness begins to shine through and the reader sees that while their relationship is never perfect but it clearly worked and Harvey grew and thrived under his care.  This story moved along at a nice pace, the writing is simple and not too emotional either.  Recommended.
Rating - 4/5 stars
Posted by (Diane) Bibliophile By the Sea at 10:37 AM