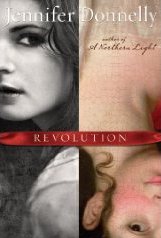 I don't read very much YA fiction, but having enjoyed Jennifer Donnelly's, A Northern Light

, so much I wanted to try her most recent novel, Revolution

weaves two girls stories into one touching tale of life, loss of life, and lasting love. When seventeen year old, Andi Alper’s younger brother, Truman died two years earlier, her family was torn apart. Andi blames herself for his death. She is depressed, and on meds as a result. Andi is a talented musician, but she is unable to focus, and she is doing terribly at the expensive prep school she attends in New York. Her father is an award winning scientist, focusing on his work in genetics. Her mother, has not been normal since Truman died.  She has seemed to checked out of the real world and instead she spends all day painting portraits of the son she lost.

As winter break approaches, Andi's dad insists that she accompany him to Paris. At the same time, Andi's mother is institutionalized. While Mr. Alpers is working in Paris, conducting genetic tests on a heart rumored to belong to Louis-Charles, Marie Antoinette's son, he tells Andi that she must settle down and write her senior thesis, a requirement for graduation.

One day Andi discovers the 200 year old diary of a young girl named Alexandrine Paradis hidden inside of an old guitar case. As she reads the diary, she learns that the girl was a nanny to the last dauphin of Paris, Louis-Charles. She learns about the royal family, the French Revolution, and soon she becomes obsessed about finding out more. What she learns reminds her of the brother she lost, and finds that Louis-Charles even looked liked her brother. Andi and Alexandrine (Alex), girls who lived two centuries apart, from totally different backgrounds yet bound by a shared grief. Add, a young man by the name of Virgil, a talented hip hop musician who seems drawn to Andi even more because of her sadness, and the story becomes even more addictive.

is a page turning read, rich in detail and full of emotion. Donnelly's extensive research shines through and through. Donnelly is one author who write well about emotional pain, and about the struggles of the human heart. Fans of YA historical novels are certainly in for a treat.
Posted by (Diane) Bibliophile By the Sea at 12:10 AM