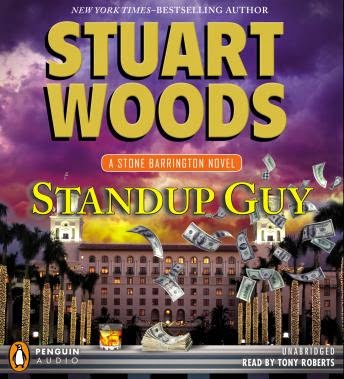 
For a number of years my husband and I have turned to Stuart Wood's Stone Barrington novels when we took a road trip. Their entertaining and don't require much brain power. Most recently we chose a recent release called, Standup Guy.

The Standup Guy in this novel is John Fratelli, an ex-con who spent 25 years in jail for armed robbery. Now just out of jail he's seeking the legal advise of Stone Barrington, another "stand-up guy", regarding an ultra sensitive financial issue.  It seems his former cell mate., Eduardo Bruno, has gifted Fratelli the key to a safe deposit box which contains $2-million dollars. The money was obtained some 20 years earlier in a heist that took place at JFK Airport.

Barrington gives Fratelli his legal opinion and thinks he's heard the last of him, but before long there seems to be several other individuals knocking on Barrington's door interested in the missing money. The plot thickens when the secret service, a former FBI agent,and even a goon or two are added to the mix. Of course as with most Stuart Wood novels, there are some beautiful women, or at least wealthy women which add some steam to the story.

The audio book, was read by Tony Roberts who made the story very entertaining. Overall, my husband liked this one a lot more than I did, but there are some amusing scenes along the way.
Joint rating - 3.5/5 stars
(library audiobook)
Posted by (Diane) Bibliophile By the Sea at 7:31 PM