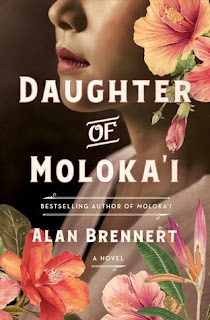 The much longed for sequel to a favorite book of mine, Moloka'i (read in 2008), which told the story of Rachel Kalama, a young girl growing up in Hawaii who developed leprosy at the age of seven.  She was taken from her family and forced to grow up in a leper colony on the island of Molokai.

While Rachel does return in this sequel, the focus is more on her daughter, Ruth Utagawa who was sent to an orphanage and then adopted by a Japanese family at the age of five.  Ruth moves from Hawaii to California along with the couple's three boys, and then sadly, Pearl Harbor forces a relocation to an internment camp.  When an unexpected letter from Rachel to Ruth arrives shortly after the war ends, the story takes an unexpected and pleasant turn.

Very little of this novel focuses on the island of Moloka'i. There was a lot of informative history which reveals the suffering some had faced, but, there were also heartwarming moments as well.  A powerful, well-researched piece about a time in history that was not spoken about often enough IMO.  I enjoyed the focus on Ruth from her birth to adulthood. I thought the author did a great job creating characters that I really cared about.

I enjoyed this sequel, but wished that I had reread Moloka'i again since it has been 11 years since book #1. I guess you probably could read this as a standalone novel but, you'd be missing a really beautiful story.
Posted by (Diane) Bibliophile By the Sea at 2:03 PM