135 - Out Stealing Horses; Per Petterson 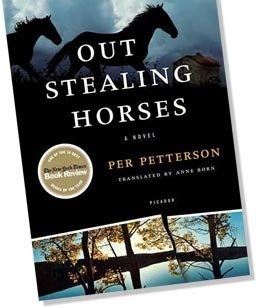 Winner of the 2007 International IMPAC Dublin Literary Award, Out Stealing Horses is a magical novel that captivated me from the first few pages. It is one of those rare books that merits rereading. The story is set in Norway. It is the story of a 67 year old man named Trond Sander who, having suffered a terrible loss, retreats to an isolated forest cabin. The run down cabin needs lots of work and Trond is content to spend his time fixing it up. He has a few neighbors, his dog, and his Dickens novels. He is perfectly content with his life of routines spent in solitude. One night he encounters a close neighbor Lars, another loner, and he realizes that this man was a child he'd known during the last summer he spent with his own father at a similar cabin some 50 years earlier after the war. Old wounds are opened by this meeting.

The book alternates between the present, 1999 and then flashes back to the summer of 1948, when he was a teenager. It is a story of loss, betrayal. While I loved this book, there were some unanswered questions when I turned the final page. Despite this, I highly recommend this book to anyone who appreciates fine literature.