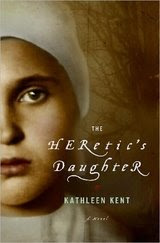 Having grown up in Massachusetts, the Salem Witch Trials have always been of interest to me. Although the subject of this novel is not a new one, The Heretic's Daughter, is by far one of the best fictional accounts of the period that I have read. I found it fascinating that the author is a direct descendant of one of the women hanged for witchcraft. This book is well researched and beautifully written, and it is just amazing to me that is a debut novel.

In some ways I saw the book as a coming of age story, and at first glance the reader might not think so, but it is also the story of a mother's love for her daughter and that special bond. Sarah Carrier is a young girl growing up in Andover, Massachusetts, a town near Salem in the late 1600's; a time when superstition and religious prejudice ran rampant. Her parents and brothers worked hard as farmers. Sarah was responsible for caring for her baby sister. After an outbreak of smallpox in the home, Sarah and her baby sister are forced to go live with her aunt and uncle. When Sarah returns home things are not the same. Nearby young girls begin accusing others of witchcraft. Her mother and a few relatives are accused, jailed and tried.

Kent did an excellent job portraying 17th century New England. I will be hoping for a sequel from the talented new author.