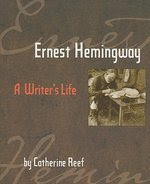 I admit to knowing very little about Ernest Hemingway's life until I read this book, except that he was undoubtedly a talented writer and literary icon, and that he loved cats. In this 192 page biography with young adults as its targeted audience, that all changed for me. Each page was filled with interesting facts about Hemingway, as well as loads photographs at various stages of his life.  Some of the facts I found interesting were: POSSIBLE SPOILERS....

He was born on July 21,1899 in Oak Park, Illinois.  His writing always reflected what he was feeling. The Sun Also Rises, was inspired by bullfights he saw in Spain.  A Farewell to Arms was based on his World War I adventures. In 1953 he won the Pulitzer Prize for An Old Man and the Sea, and in 1954 The Swedish Ambassador to Cuba awarded him the Nobel Prize for Literature.  Like his father, he committed suicide on July 2, 1961 in Ketchum, Idaho.  His health was failing and he suffered from depression.  Many of his books were published after his death. His house in Key West, Florida is a national historic landmark, and is open for tours.

MY THOUGHTS - In my opinion, this book is a great biography for anyone interested in a brief, yet well rounded book about one of the great writers of all time. RECOMMENDED - 4.5/5

(Library Book)
Posted by (Diane) Bibliophile By the Sea at 7:17 PM