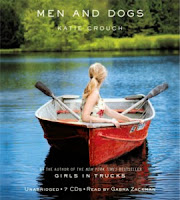 ; Katie Crouch
Hannah Legare is 35 year old woman dealing with a lot of issues --one might even say that she is her own worst enemy.  Her husband gets tired of her cheating ways, and one throws her out. One day, after having too much to drink, she climbs up on the fire escape to beg forgiveness from her husband, but she takes a fall and injures herself in the process.  Hannah has hit rock bottom.  Her mother Daisy, demands that she return home to Charleston, South Carolina to recover.  It is here, that the ghosts of Hannah's past catch up with her.
When Hannah was just (11) year's old , her father, Dr. Buzz Legare went out fishing one day with his dog on a small boat. The dog was found alone in the boat, but Buzz was never found. Did he meet with an untimely death, or did he quietly slip away to start a new life?  Whatever happened did not devastate her mother Daisy, who remarried one year later.  Hannah's brother Palmer, is a successful Veterinarian. Palmer is gay, and he has not found happiness in his life, despite his success as he manages to always keep people at a distance. While others have seemed to have gotten beyond the mysterious disappearance of Buzz, Hannah has not.
Men and Dogs

is one of those stories where I thought it was hard to feel sorry to the main character, Hannah. Her childish, self destructive behavior just seemed so irresponsible. It is a story that proves once again how the scars from unresolved childhood trauma and emotional hurts, can in fact last a lifetime.  Gabra Zackman was the audio book reader was very good. The ending seemed a bit too rushed, and in the end I would consider this to be a somewhat average novel.