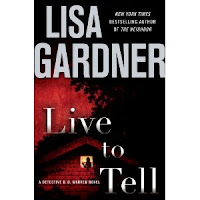 , by Lisa Gardner, starts off in high gear with Boston homicide detective, D.D. Warren back in action once again. Duty calls interrupting her dinner date, when she learns that a family has been killed: mother, 2 children dead and the husband/father clinging to life. One child, 9 rear old Danny (Danielle) was spared. Was it a murder and attempted suicide? If so, why was Danny spared? Just as the 38 year old detective begins to investigate, another family is murdered, less than (2) days later. The second mass murder was (5) victims with a dinner table set for (6). One family was middle class, the other family poor.

In parallel story lines, we have the stories of (2) women: Danielle Barton, the survivor of the first mass murder some twenty years later. Danielle is a troubled woman who relives that horrible night over and over again. She is psych nurse at a locked down facility outside of Boston. The patients are extremely violent and psychotic children. The descriptions of the behaviors of these children had me biting my nails as I read....not for the faint of heart.

The other story line was about a woman named Victoria, a mother who would do anything to protect her extremely violent and troubled son Evan. Evan is a young boy who could be sweet one minute and then threatening to stab his mother the next. His father took the couple's daughter and moved elsewhere for their own safety, but Victoria wasn't done trying to help her troubled son.

This was one of the tougher books to review. I honestly had no idea how the stories were all going to come together. They did come together in a surprising, but not totally satisfying way for me. Don't get me wrong, this book packed a wallop! The writing shocked me to the core, and I could not put it down. Even though I was not totally satisfied with the way the story ended, I was happy I read this thriller. If you have not read the (3) earlier books in the D.D. Warren series, you will still be able to follow this along with this shocker just fine. As always, I will be looking forward to more novels by Lisa Gardner, who, in my opinion has never written a boring novel.