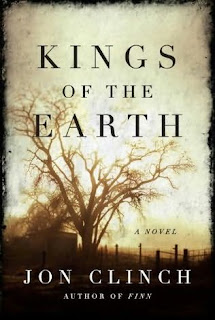 Kings of the Earth

; Jon Clinch
(amazon)......In Clinch's multilayered, pastoral second novel (after Finn), a death among three elderly, illiterate brothers living together on an upstate New York farm raises suspicions and accusations in the surrounding community. After their beloved mother, Ruth, dies, Audie, considered mentally "fragile," is devastated, but goes on tending to the Carversville farm with his brothers Vernon and Creed. When Vernon, frail at 60 and not under a doctor's care, dies in his bed with evidence of asphyxiation, Creed is interrogated by troopers, along with Audie, the brother closest to Vernon. Family histories and troubles are divulged in short chapters by a cacophony of characters speaking in first person. Secrets and hidden alliances are revealed: Vernon's nephew, Tom, grew and sold marijuana, which the family used medicinally; the brothers endured painful, bloody haircuts administered by their father. Alongside the police troopers' investigation, each player contributes his own personal perspectives and motivations, including allusions to homosexual behavior. Inspired by the Ward brothers (of the 1992 documentary My Brother's Keeper), Clinch explores family dynamics in this quiet storm of a novel that will stun readers with its power. 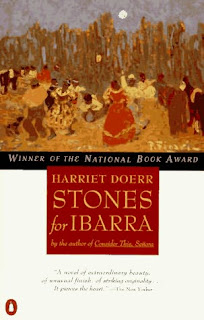 ; Harriet Doerr
(amazon)........This is the story of an anglo married couple, Richard and Sara Everton, who, in a burst of idealism, move from San Francisco to an old family home and abandoned mine in Mexico. Why, in the face of vociferous objections and concern from all their friends, would they move to a house they know has no electricity or water and aren't even sure is still standing? Richard and Sara go "in order to extend the family's Mexican history and patch the present onto the past. To find out if there was still copper underground and how much of the rest of it was true, the width of sky, the depth of stars, the air like new wine, the harsh noons and long, slow dusks. To weave chance and hope into a fabric that would clothe them as long as they lived." Their years as Ibarra's only foreigners - Richard's work, his illness, Sara's work, her care of Richard, their neighbors and friends, the constantly surprising landscape, the stones - is a story told with affectionate and patient wisdom. Perhaps it is a story a long time coming: Harriet Doerr got her BA at age sixty-seven and published this (her first) book a year later. 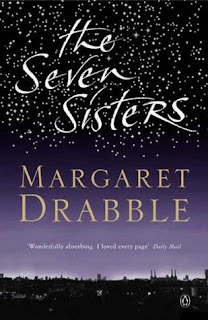 
(amazon).....It's hard to get across just how flat-out thrilling, how readable, how absorbing is Margaret Drabble's novel The Seven Sisters. It sounds positively dull when you describe it: Candida Wilton, a faculty wife of late middle age, has been dumped by her allegedly do-gooder husband. Her three daughters aren't too impressed with her, either. The mousy Candida decamps to an inglorious flat in London, where she measures out her time in visits to the health club, trips to the grocery store, and her weekly evening class on Virgil. She tentatively makes a few new friends and rediscovers some old ones. This opening section of the book, told in diary form, is a marvel of tone. With very little action, Drabble makes Candida's forays into the world quietly electrifying. One of her new pleasures is recording in her diary her mounting dislike of her ex-husband. You sense a giddy freedom: "Andrew had come to seem to me to be the vainest, the most self-satisfied, the most self-serving hypocrite in England. That kindly twinkle in his eyes had driven me to the shores of madness." Ah, but there's more life for Candida yet. A small, unexpected inheritance is left to her, and so she organizes her friends--all female, mostly aged, mostly unmarried--into a tour of Naples as Virgil describes it in The Aeneid. Their holiday is a fictional tour-de-force: by turns a hilarious send-up of group dynamics, a metafictional lark, a feminist rant, and a dark acknowledgement of Candida's mortality. In the end, Drabble's novel is a very serious one, and a very good one.
Have you read any of these?
Posted by (Diane) Bibliophile By the Sea at 12:04 AM