162 - Owen and Mzee: The True Story of a Remarkable Friendship; Isabella and Craig Hatkoff and Dr. Paula Kahumbu 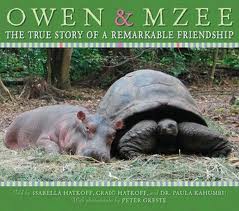 tells the remarkable story of Owen, a baby hippo and Mzee, a 130 year old giant tortoise.
In December of 2004, a frightened baby hippo became separated from his mother and the rest of his family, when the tsunami it southeast Asia.  When this baby hippo was found, he was alone on a coral reef. Although he was only 2 feet tall, he already weighed over 600lbs, which made rescuing him extremely difficult. A brave visitor names Owen Sobien was instrumental in saving Owen, and because of that is how Owen got his name.
Unable to survive on his own, and since he would be seen as an intruder if he were to be placed in pods with other hippo families, it was decided that Owen should be transferred to an animal sanctuary in Mombasa.  Owen was exhausted from the long trip, however when placed at the sanctuary, he was immediately drawn to Mzee, a 130 year old tortoise. The two soon began to eat together, swim together and sleep together as well.  Wildlife experts still remain puzzled by this unlikely friendship.
Owen and Mzee

is an  inspiring true story about finding a lasting friendship, when and where one least expects it.  The story is a true testament to the fact that when tragedy strikes, the best friend just might be one we'd least expect.  This is such a sweet story, and the photography by Peter Greste is also excellent. HIGHLY RECOMMENDED.
RATING - 5/5 stars
Library book
Posted by (Diane) Bibliophile By the Sea at 4:28 PM