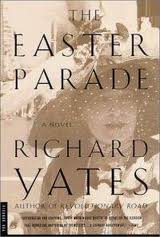 a few years back. I loved both the book and the movie. Ever since that book,  I knew that I would want to read more of his books. So when I read the first paragraph of Easter Parade

,  I was immediately drawn into the lives of the Grimes sisters.

"Neither of the Grimes sisters would have a happy life, and looking back it always seemed that the trouble began with their parents divorce. That happened in 1930, when Sarah was nine years old and Emily was five. Their mother, who encouraged both girls to call her "Pookie," took them out of New York to a rented house in Tenafly, New Jersey, where she thought the schools would be better and where she hoped to launch a career in suburban real estate.  It didn't work out--very few of her plans for independence ever did--and they left Tenafly after two years, but it was a memorable time for the girls."
This book too deals with the disenchantment of everyday life, and the longing for something more....the illusive butterfly, that if found, would make our life just perfect. The people in this novel drink too much, make bad choices in relationships and live their lives afraid to share how they really feel.
Although this story centers around the Grimes sisters, the reader gets a feel early on for the discontent in the lives of their parents, which results in divorce in 1930. Their mother Pookie is a dreamer; she's demanding, always interested in image, and detached from the needs of her children. The father too is distant and detached. He drinks too much, is dissatisfied with his job as copy desk man for the Sun newspaper, and his life is that of a lonely man.  But the story is really about the Grimes sisters. They were born (4) years apart, and their story covers a span of about (40) years.

Sarah, is the oldest and was always seen as the pretty one. She grows up confident, marries young as soon as she gets out of school. She moves to the suburbs, to an estate owned by her husband's family, and has (3) sons, one after another. Her marriage is far from perfect.


"She served lunch that was almost as inadequate as one of Pookie's meals; the the problem was that the conversation just kept petering out. Sarah wanted to hear everything about Barnard, but when Emily began to talk she saw her sister's eyes glaze over in smiling boredom. Pookie said, 'Isn't this nice? Just the three of us together again? But it wasn't really very nice at all, and for most of the afternoon they sat around the sparsely furnished living room in attitudes of forced conviviality, Pookie smoking many cigarettes and dropping ashes on the rug, three women with nothing much to say to one another."
Emily was the shy one. She was smart, and goes off to Barnard College on a full scholarship. Shes becomes a career woman, and although she does marry, the marriage is brief, and her relationships with men become not much more than a string of unsatisfying relationships with weak and insecure men.


"The tears, as always before in her life were wholly for herself--for poor, sensitive Emily Grimes whom nobody understood, and who understood nothing."
The thing that made this novel so sad, yet so very moving at the same time, was the fact that each sister was miserable with how their life turned out yet, they envied the life that the other one had.  Although I never had a sister, I felt deeply for the Grimes sisters, and rooted for each of them at different times.

If you love fine literature and an author who can pull you into the lives of his characters, then I know you will enjoy The Easter Parade. If I had to change one thing about this novel, I would have liked to have had it told in alternating POVs instead of just Emily.  Despite this, I would highly recommend this book.
Posted by (Diane) Bibliophile By the Sea at 10:32 PM