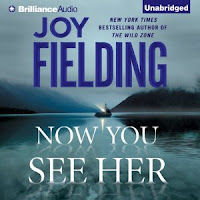 Title: Now You See Her

Setting: Ireland; Canada
Rating: DNF
Recommend: No
Book Description from Amazon website - Fifty-year-old Marcy Taggart’s life is in shambles. Two years ago, her twenty-one-year-old daughter, Devon, perished in a canoeing accident. Her body was never found in the icy waters of Georgian Bay, and as a result Marcy has never fully accepted her death. She continues to see the young woman’s face in crowds and has even stopped strangers on the street, certain she has finally discovered her long lost daughter.

Now in Ireland, on what was originally intended to be a celebration of her twenty-fifth wedding anniversary—if, that is, her husband had not left her for another woman—Marcy yet again thinks she sees her daughter, casually strolling past her on the sidewalk. So begins Marcy’s desperate search to find Devon, to find herself, and to find the disturbing truth that might, in the end, be her only salvation.

While I enjoyed this authors earliest books, for me, listtening to this audio book felt like I was watching paint dry (no fault of the reader). Nothing happened in this book after listening to (3) cds, except for Marcy being dumped by her husband, and several times when she was sure she saw her daughter who was presumed dead.....but, then each time she would lose sight of her in a crowd of people before she could get a closer look. I could not finish this one: my first DNF for 2011.
Posted by (Diane) Bibliophile By the Sea at 10:02 PM

Email ThisBlogThis!Share to TwitterShare to FacebookShare to Pinterest
Labels: DNF