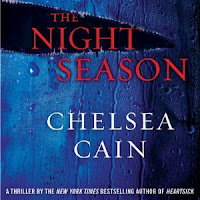 Date Completed: 4/5/2011
Setting: Oregon
Rating: 2/5
Recommend: No
I have been of fan of Chelsea Cain's, Archie Sheridan and Gretchen Lowell novels, for the last several years. In Heartsick

, and Evil at Heart

, the stars are, Archie Sheridan, a police detective from Portland, Oregon, and Gretchen Lowell, a serial killer who has played cat and mouse, tormenting Archie, landing him in a psych hospital briefly, hooked on painkillers, but finally as of the last novel she is behind bars.  The other two characters are Henry Sobol, Archie's partner, and Susan Ward, a newspaper columnist that Archie has the hots for. I wondered what direction her new book would take without Gretchen, the serial killer, to keep readers on the edge of their seats, and biting their fingernails as they turned each new page.  I was anxious to find out what Night Season

In this latest offering, Archie Sheridan and  fellow partner Henry Sobol have their work cut out for them. Susan Ward is another returning character, who, in this novel is covering a story about a flooding which had wiped out a town many years earlier.

The story opens with a horrific flood in 1948 that wiped out the entire town of Vanport. Some 15 people who lived in a public housing project at that time, lost their lives.  The story then flashes to the present time when once again heavy rains, and flooding are occurring in the Portland area. A skeleton surfaces around a dog park, with origins from as far back as the flood of 1948. Before long a woman who was reported missing turns up dead, and two more people who were thought to have died from drowning, turn out to have strange bite marks on their bodies, and tests show they have been poisoned.

Without saying much more about the serial killer, the source of the poisonous toxin, or how the story ended, I'll just say that I was extremely disappointed in this thriller.  It was not a nail biter like Cain's previous three novels, and quite frankly, once the mystery began to unravel, I thought the whole story was far fetched and just plain crazy. The audio book was read by the author and the reading was well done, however the story itself left me disappointed. For me, I think it is probably time to try a new thriller series.
Posted by (Diane) Bibliophile By the Sea at 9:57 PM