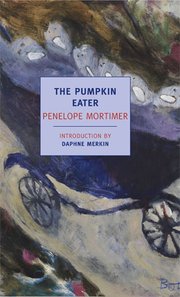 is an interesting story, which takes place in London, and is reported to be somewhat autobiographical. The story begins with an unnamed woman talking with her therapist Mr Simpkin. We learn the woman is Mrs. Armitage. She's been married (4) times, she hates dust and messes, and has (8) children from her previous marriages. She seems to be her own worst enemy. Her current husband Jake and she have been married (13) years and, she wants to have a baby with him, but Jake does not. Jake's a womanizer, and he has a bit of a temper as well. The last thing he wants is another child in the house, in fact he wants to send his wife's (3) oldest boys off to boarding school.  Mrs A seems only to know how to reproduce. Her whole identify has been tied to having babies.  She has servants, so she need not worry about caring for the babies once she has them. When she does become pregnant once again, abortion is discussed, decisions need to be made. Mrs A is forced to examine her marriage and her life.
There was a lot to think about in this book. It covered the age old topics of marriage, motherhood and fidelity in oftentimes humorous fashion. I was a little surprised that abortion was raised in this story, since this book was originally published in 1962 London. While I liked the book enough to recommend it, for a 222 page book, it took me a while to complete it. It was one of those books that I read at lunch on a few workdays, but wasn't obsessed about finishing it when I got home in  the evening.
I couldn't stop thinking about the nursery rhyme by a similar name throughout this read......"Peter Peter Pumpkin Eater had a wife and couldn't keep her  ". I was curious about the origin of this rhyme (according to Wikki). While in the nursery rhyme, Peter .... "put her (his wife) in a pumpkin shell ", in this story, although the Armitages' live in the city, Jack builds a glass tower in the country, for their "happy years", and his wife escapes to the tower for much needed quiet contemplation about her life.
This book is a bit different, but I can see many of my readers enjoying it.
Posted by (Diane) Bibliophile By the Sea at 6:15 PM