For today's First Chapter First Paragraph Tuesday Intro, I'm featuring a book I began yesterday. I haven't seen this one blogged about very much, but I want to say that I am enjoying it so far. 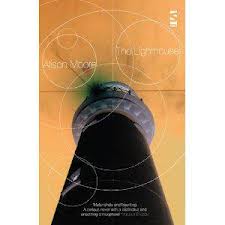 "Futh stands on the ferry deck, holding on to the cold railings with his soft hands.  The wind pummels his body through his new anorak, deranges his thinning hair and brings tears to his eyes. It is summer and he was not expecting this. He has not been on a ferry since he was twelve, when he went abroad for the first time with his father.  It was summer then too and the weather was just as rough so perhaps this should not take him by surprise.

His father took him to the ferry's cinema. Futh does not remember what they saw.  When they sat down the lights were still up and no one else was in there.  He remembers having a bucket of warm popcorn on his lap. His father smelling of lager, he had drunk beforehand at the bar, turned to Futh to say, 'Your mother sold popcorn'."

Would you keep reading?
Posted by (Diane) Bibliophile By the Sea at 12:30 AM