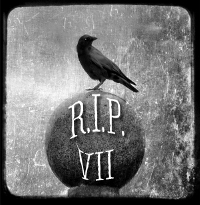 Once again, it's time for Carl's annual RIP event. Thanks Carl. I know many of you look forward to this challenge every fall (this is my 5th year).  Although there are several different levels of participation, I'm sticking with Peril the First (read 4 books that fit the challenge between, September 1st and October 31st).


Have you read any of these? Where shall I begin?
Posted by (Diane) Bibliophile By the Sea at 9:51 PM