The One and Only Ivan; Katherine Applegate 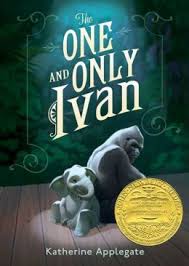 The One and Only Ivan; Katherine Applegate
Harper Collins - 2012
2013 - Newberry Prize Winner

The One and Only Ivan is a story about an extremely brave and courageous silver back gorilla; his name is Ivan.  Ivan and his twin sister were captured as babies in the wild and taken away with the intention of having both live behind bars somewhere.  His sister never made it, she died in transport, and Ivan ended up as a store front gorilla behind glass and bars at the Big Top Shopping Mall.

For years Ivan lived with his friend Stella the elephant there but over the years, business has dwindled and Stella has a bad foot and can't perform like she once did.  The owner of the mall, Mack, decides to bring in a baby elephant to help business; her name is Ruby.  Ruby was taken from the wild just like Ivan.

Ivan makes a promise to Stella that he intends to keep, a promise of a better life for Ruby, the new arrival at the mall where he lives. Through his artistic ability and with help from a special little girl, he may just be able to keep his promise and help them all.

The story is told by Ivan and he shares what he has learned about life and humans over the years.  His voice is pitch perfect, and although it is sad in parts, it can make you chuckle as well.  It is a story that will make even young readers (8+) think about what is really best for animals, and it will make older readers think twice about some of Ivan's observations about us humans as well.

I loved this story and thought it was tastefully done and award-worthy.  The author does not come across too strong as an animal right's activist, but through Ivan's observations, most of which are spot on, not much more needs to be said.

Humans speak too much.  They chatter like chimps, crowding the world with their noise even when they have nothing to say.

It took me some time to recognize all those human sounds, to weave words into things.  But I was patient.

Patient is a useful way to be when you are an ape.

Gorillas are as patient as stones. Humans, not so much."
Posted by (Diane) Bibliophile By the Sea at 9:53 PM