Waiting on Wednesday - The Edge of the Earth; Christina Schwarz

"Waiting On" Wednesday is a weekly event, hosted by Jill @ Breaking the Spine, that spotlights upcoming releases that we're eagerly anticipating. This week's pick is one that I'm anxious to read. 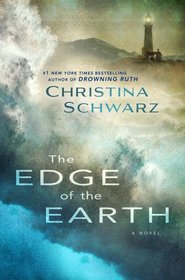 The Edge of the Earth; Christina Schwarz
April 2, 2013 - Atria Books

(about the book)
From the author of Drowning Ruth, a haunting, atmospheric novel set at the closing of the frontier about a young wife who moves to a far-flung and forbidding lighthouse where she uncovers a life-changing secret.

Trudy is a polished, college-educated young woman from a respectable upper middle-class family, and it's only a matter of time before she'll marry Ernst, the son of her parents' closest friends. All should be well in her world, and yet Trudy is restless and desperate for more stimulation than 1897 Milwaukee will allow.

When she falls in love with enigmatic and ambitious Oskar, she believes she's found her escape from the banality of her pre-ordained life. Alienated from Trudy's family and friends, the couple moves across the country to take a job at a lighthouse in the eerily isolated Point Lucia, California. Upon arriving they meet the light station's only inhabitants' the Crawleys, a family whose plain appearance is no indication of what lies below the surface. It isn't long before Trudy begins to realize that there is more going on in this seemingly empty place than she could ever have imagined. Gorgeously detailed, swiftly paced, and anchored in the lush geography of the remote and eternally mesmerizing Big Sur, The Edge of the Earth is a magical and moving story of secrets and self-transformation, ruses and rebirths, masterfully told by a celebrated and accomplished author.
Posted by (Diane) Bibliophile By the Sea at 5:30 AM