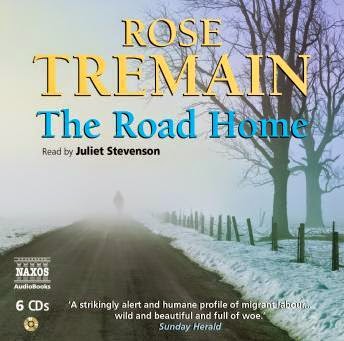 The Road Home starts out rather sad. The protagonist, Lev, leaves his Russian village for London to find work after losing his job at the local sawmill. He's 43 and needs work so he can send money home to his mother for both her and his his young daughter. Lev is recent widower  who lost his wife to leukemia at the age of 36. He's understandably depressed, leaving all that is precious to him behind in order migrate to London to find work. He keeps in touch with his good friend Rudi back home by cell phone in this post 9/11 time frame.

While traveling across Europe by bus, he meets Lydia who is also facing trying times.  Lev's English is poor and he is unfamiliar with some customs. Trying to stretch the little money he has, he initially sleeps in doorways until Lydia helps him to find a room in a rundown place. The house is owned by an Irish plumber who drinks a bit too much and is also missing his family who have recently moved out. Lydia also helps Lev find a job, first distributing leaflets, then as a dishwasher and later as a cook.  Still depressed and missing his wife and family, he meets Sophie, a tattooed vixen who is more than willing to cheer up poor Lev, but there is more to Sophie than meets the eye. She is a compassionate young woman who spends her free time volunteering at Ferndale Heights, a home for the elderly.

The focus of the story is on Lev and how he tries to navigate life in an unfamiliar country after having suffered tremendous personal loss. The story is interesting enough, but it was a little to quiet for me.  Although some readers may view the ending as convenient, to me it was evident early on how this story might end, I just wasn't aware of the specifics.  The Road Home is a story about loss and about loneliness. It's about picking yourself up when life throws you a curve ball and about doing what you need to do in order to move on. The author manages to capture all of this very well without making it too sad. For me, the best past of this novel was the multi-dimensional characters, each flawed in some way, yet so real and so memorable.

I liked the audiobook because of Juliet Stevenson, who is an amazing narrator. She is so skilled at capturing so many different accents and timbres. While listening it felt like the story was choppy, and "choppy" it was for a reason -- this was an "abridged" version, which made me kind of mad. I didn't realize libraries even purchased "abridged" audiobooks. Had I realized this earlier on, I would have read the print edition which I'm sure I would have enjoyed a bit more.