The Weight of Blood; Laura McHugh 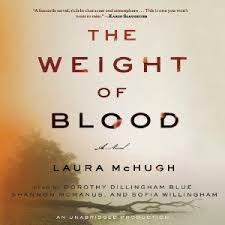 
The town of Henbane, Missouri is a small, somewhat isolated town in the Ozarks where everyone seems to knows everyone. It's a town where secrets lie buried, but not forever.

The Weight of Blood is divided into 3 parts and weaves together two stories set almost 20 years apart. This style can sometimes be a difficult task to do well, but, debut author Laura McHugh succeeds.

The first part begins with Lucy Dane, a young woman who tells the story of her former friend and classmate, a girl named Cheri. Cheri was developmentally challenged, and while other kids made fun of her, Lucy befriended Cheri.  When Cheri was 18 she disappeared and her dismembered body was later found by a creek in town,  just across the road from Lucy’s family business. Decades earlier Lila, mother of Lucy, was a young woman from Iowa whose parents had died. Lila was put into the foster care system and learned how to protect herself from sexual predators, or so she thought. When she was old enough to leave the system, she needed to find a job and responded to and add as a live-in housekeeper, in Henbane for Crete Dane, who owned the in town restaurant and general store.  Lila's beauty has all eyes on her by Crete and others of the opposite sex. She finds herself pregnant with Lucy. Some people in town view her as a witch because of the seductive allure she seems to possess, and then one day she goes missing.  Lucy is still a baby at the time and left without a mother.  Some suspect Lucy's father of murdering her, but no one is ever sure what happened.

Lucy, like her mother, is striking with her dark hair and alluring eyes. Some feel that like her mother, she must be a witch. Obsessed with finding out what happened to her mother, as well as her friend Cheri, she gets a local boy to help her dig deeper. A locket that belonged to Cheri is found, linking her possible disappearance and murder to some too close for comfort individuals.  Before long those long buried secrets which some intend could prove more risky for Lucy than she ever imagined.

It's a story which explores violence against women, which is often swept under the rug in a small town setting. An enjoyable semi-mystery, even though my early suspicions proved correct. The setting itself seemed to take on a life of its own, and the author does a great job creating a well paced story with almost a Gothic feel. I loved how they story pulled me in early on, loved the gutsiness of Lucy, and I thought that the ending was perfect as well.