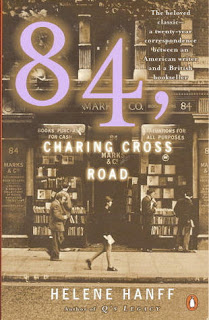 This book was such a lovely, charming and even sometimes funny memoir. A story that began with a simple letter inquiring about the availability of some used books.  Helene Hanff lived in New York City and worked as a freelance writer, she initiates a book inquiry letter. Frank Doel, is a proper Englishman who managed a used book store, 84, Charing Cross Road in London, the bookstore where Helene's first letter is sent.

Helene and Frank never meet but correspond for over 20 years. Initially their letters seem to be mostly about books, but as the years go by the letters begin cover a variety of topics.  Where Helene is often witty, Frank is generally serious and proper. It was wonderful to see how over the years their letters change and a very special friendship develops. I found the ending unexpected and sad but, I was so happy I finally decided to read this slim gem of a book.

I immediately decided to watch the movie version of this memoir, staring Anthony Hopkins and Ann Bancroft, and, although I did like the movie, I loved the book even more.

"Trust you and Nora had a fine holiday. Mine was spent in Central Park, I had a month's vacation from Joey, my dear little dentist, he went on his honeymoon.  I financed the honeymoon. Did I tell you he told me last spring I had to have all of my teeth capped or all of my teeth out?  I decided to have them capped as I have got used to having teeth. But the cost is simply astronomical.  So Elizabeth will have to ascend the throne without me, teeth are all I'm going to see crowned for the next couple of years."

Have you read this book or watched the movie?

Email ThisBlogThis!Share to TwitterShare to FacebookShare to Pinterest
Labels: books and movies, Books That I Loved