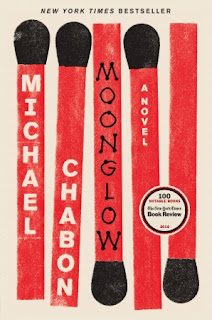 "This is how I heard the story.  When Alger Hiss got out of prison, he had a hard time finding a job.  He was a graduate of Harvard Law School, had clerked for Oliver Wendell Holmes and helped charted the United Nations, yet he was also a convicted perjurer and notorious as a tool of international communism.  He had published a memoir, but it was dull stuff and no one wanted to read it.  His wife had left him. He was broke and hopeless. In the end one of his remaining friends took pity on the bastard and pulled a string.  Hiss was hired by a New York firm that manufactured and sold a kind of fancy barrette made from loops of piano wire.  Feather combs, Inc., had gotten off to a good start but had come under attack from a big competitor that copied its designs, infringed on its trademarks, and undercut its pricing.  Sales had dwindled.  Payroll was tight. In order to make room for Hiss, somebody had to be let go."

This one is a book group read for July. What do you think?
Posted by (Diane) Bibliophile By the Sea at 12:00 AM