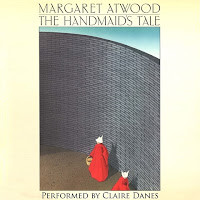 
I first read this book back in January of 2010, but since everyone seems to be talking about the television series or the book lately, I decided to try it again, but this time on audio -- read by Claire Danes (who did an awesome job). Once again, I really enjoyed this book, which is clearly outside of the kinds of books I am normally drawn to -- happy reading surprise.  Below is my review from 2010.

Margaret Atwood's, The Handmaid's Tale is a dystopian novel set in the futuristic Republic of Gilead, formerly the US, a place now run by a conservative Christian dictatorship.  It is here where the men are in charge, everyone is being watched over, and all offenders of ANY laws are prosecuted.

The narrator, thirty-three year old Offred, is a "handmaid". (a handmaid is a fertile woman whose life is one of isolation. She is forbidden associations with other men or friendships with other women). Previously, Offred enjoyed life with her husband and child. She use to have her own job, own money, and own interests.  Since she is presumed fertile, the new leadership has taken away her child, her money and she is being offered to the Commander of the government as a "handmaid" for the purpose of being him a child.  With birthrates declining dramatically, women are prized only for their fertility and their ability to reproduce. They are forbidden to work, own property or even to (GASP) read. If no baby is produced within two years these "handmaids" are sent to colonies for "unwomen".

MY THOUGHTS - Can you imagine such a scary thought -- women being stripped of their identity and having their existence justified by their ability to breed? Without giving away too much of the plot, I'll just say that there is even a monthly "ceremony" ritual that made me scratch my head in disbelief. How about a repressive society where order is maintained by terrorizing its people?  A chilling, but thought provoking read that drew me in from the very first page. I did not expect to enjoy this book, however by the end I was amazed at what an effect this book had on me.

I haven't seen the television series yet, have you? If so what did you think?
Posted by (Diane) Bibliophile By the Sea at 6:26 PM