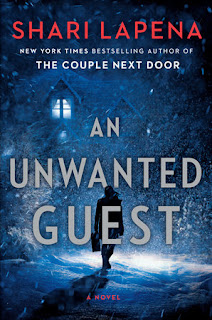 Mitchell's Inn, a remote getaway nestled in the Catskill Mountains of NY is the perfect place for recharging oneself or for a romantic getaway. There's a wood burning fireplace, a wine cellar, a library full of books and games and more.  The snow is falling and soon a major blizzard and ice storm is in full play. The guests: an attractive wealthy young engaged couple, a middle aged couple whose marriage is on the rocks, two female friends, a female author working on a novel, a NYC lawyer acquitted of his wife's murder and the inn keeper and his son.

On the first night the storm has caused the Inn to lose power, the generator is not working, no phone, no WIFI, and everyone's cell phones are losing their charge.  Sometime during the night a woman's body is found at the bottom of the staircase and it looks like an accident, but is it?  The ice and blizzard prevent the medical examiner from promptly removing the body which puts the other guests on edge.  However, when a second and eventually third person dies, everyone is a suspect.

It seems that almost every guest has a secret which are slowly revealed. This is a fast-paced whodunit, reminiscent of Agatha Christie's "And Then There Were None". I must say, I liked the modern feel of this one, and, I didn't guess who the murderer was either. There were plenty of red-herrings to throw me off track.

I was happy to pick this one up from the library as I liked the author's 2 earlier books. The cover art really drew me and I thought it was just perfect based on how the story plays out.
Posted by (Diane) Bibliophile By the Sea at 2:48 PM