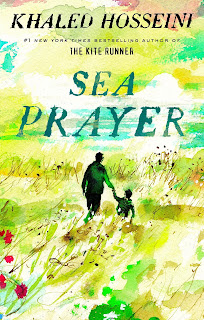 "Inspired by the story of Alan Kurdi , a 3 year old Syrian refugee, who drowned in the Mediterranean Sea trying to reach safety in Europe in 2015.  In the year after Alan's death 4,176 others died or went missing attempting the same journey."

This was a very short story but powerful story. It's a message from a father to his young son on the eve before the two will attempt to free Syria's war zone for the hope of a better life.

This book is targeted for ages 7 and up.  The vivid watercolor images, the message emphasizing the refugee crisis are well done but, I thought the story may be difficult for some younger children to fully understand. The proceeds from the sale of this book will go to UNHCR, the UN Refugee Agency.
Posted by (Diane) Bibliophile By the Sea at 10:38 AM

Email ThisBlogThis!Share to TwitterShare to FacebookShare to Pinterest
Labels: Riverhead