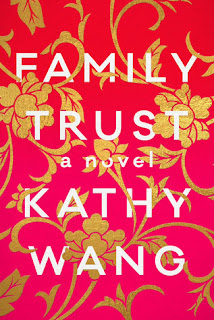 Stanley Huang has long claimed to have it all. Once a poor man in China, through hard work he has attained the American dream and should now be enjoying life. On the contrary, Stanley has been given a death sentence, diagnosed with pancreatic cancer, he's forced to get his affairs in order and quick.

Family Trust is a complicated and sometimes funny family drama told from alternating POVs.  There is Linda, Stanley's ex-wife, who was married to him for 34 years. She wants to make sure that the couples (2) adult children get the bulk of his inheritance and not his much younger current wife, Mary.  There is son Fred, is a Harvard Business grad, who hasn't quite attained the corporate prestige and recognition he had hoped for.  Daughter, Kate, is a working mom, supporting a husband who has been trying to get a business off the ground and, lastly, Mary, the much younger current wife of Stanley, who has been married to Stanley for 9 years.

I loved the way the story is told, the various POVs and terrific character development worked well.  Although I disliked a couple of the characters, some of the things that happen to them at times were so funny that I could overlook their short comings.  I thought this was a well written and engaging debut novel about an Asian American family and life in Silicon Valley. It was, in some ways, was reminiscent of The Nest.
Posted by (Diane) Bibliophile By the Sea at 2:42 PM