A Ladder to the Sky; John Boyne 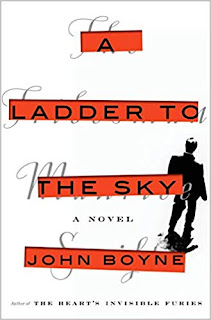 Just who is Maurice Swift, the protagonist and sociopath, of this delightful literary novel?  We first meet him in 1988 when he is working as a waiter at a West Berlin hotel's restaurant.  He's a guy who wants to a writer but, he's lazy and has no talent; he does have charm though.  He figures he doesn't have to give up on his dreams to become a success, why not just find another way to achieve his goal.

His first opportunity to achieve that literary success is when he meets a somewhat famous, but lonely, older novelist named Erich Ackermann.  Maurice is full of charm and compliments and quickly has won the trust of Ackermann who in a weak moment shares some private, secrets from his past which Maurice sees as excellent material for a successful novel. He takes what he's learned and turns it into his own successful book. He isn't satisfied just yet either,  he's certain he's capable of even more literary success, and you can be sure he'll find another unsuspecting, talented victim soon.

I thoroughly enjoyed this delicious novel. The handsome, but sinister Maurice is not a character I will easily forget. Was he unlikeable, yes, but memorable all the same. This is a guy who knows when and what buttons to push to manipulate others for his own personal gain. There were a few parts which were a bit slow, but overall, this a pleasant treat. I must say that I loved the ending as well. Try It!
Posted by (Diane) Bibliophile By the Sea at 7:13 AM