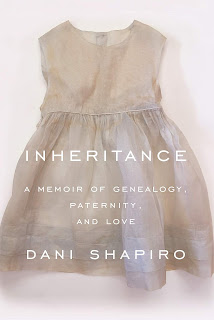 Blond, blue-eyed author Dani Shapiro was told on a few occasions that she didn't look Jewish even though she grew up in a Jewish Orthodox family with roots from Eastern Europe.  One day in 2016, on a whim she decides to have a DNA test done in conjunction with Ancestry.com.  When the results come back, her life is turned upside down.  She learns quickly that the only father she had known, was not her biological father.

Deeply personal and moving,  as I read her story it began to raise all sorts of questions for me.  I found this memoir fascinating and a real page-turner. I thought it was sad that many of the questions that she would have liked to have answered were ones that only the two people  she thought she knew  best took to their graves.

If you have any interest in genetics or paternity, try this memoir.
Posted by (Diane) Bibliophile By the Sea at 7:10 PM