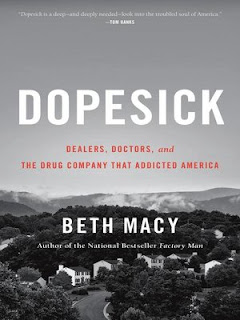 Dopesick is a well-researched and in-depth look at the current opioid crisis in America and how it all began.

The author tells of the corporate greed at the hands of Purdue Pharma who first released Oxycontin in 1996 as a slow-released pain reliever , a drug which came in several doses and was said to be less addictive than other pain blockers on the market but, nothing could have been farther from the truth.  The company spent over 4 billion dollars in one year on marketing and offered all sorts of perks to sales reps and doctors for pushing their product. Doctors began prescribing it not just for intolerable pain and cancer but for things like arthritis, wrist pain, back pain and more.  The drug, highly addictive after less than a weeks use, it wasn't long before abusers learned to crush it, snort and even inject it.  Fifteen years later once doctors drastically cut back on prescribing the drug and blackmarkets prices skyrocketed, many users turned to the less expensive and more potent heroin.

There are so many aspects of the opioid crisis covered in this book that I found fascinating. Stories of drug runners, tragic stories from users as well as stories from the grieving families.  The audio is read by the author who did a fantastic job.  There is just so much information revealed on a very tough subject. Highly recommended.

Posted by (Diane) Bibliophile By the Sea at 6:11 PM