Quick Reviews of a few so so reads

I hadn't realized that this audio was a short story, a prequel to a new Deaver series, when we began it on a recent road trip. Although it hooked us right away, it was over so fast and ended so abruptly that I couldn't help but be disappointed.

Colter Shaw is the new character we are introduced to and who appears in Deaver's next novel, The Never Game.  He's an interesting character, definite loner, who travels around the US locating missing persons for a fee.

His new client is Ron Matthews, a wealthy businessman, whose wife, an artist, has been missing for about a month. It's not unusual for Evie Fontaine to go to art shows solo as Ron doesn't share her interest in art.  It's easy to suspect early on that maybe she has met someone who she has more in common with or maybe she was escaping for another reason.  As Colter Shaw follows some leads we learn there may be more to the couples relationship that wasn't revealed from the start.

I do think Colter Shaw seems like a interesting character and the new series has the potential of producing some decent novels but, this short story was just so rushed that we couldn't help but feel cheated in the end. 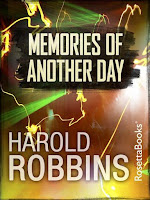 If you've been following my reviews for the last few months you'll recall my husband and I have been on a bit of a Harold Robbins kick. We listened to A Stone for Danny Fisher (which we loved) as well as Never Love a Stranger (pretty good) and now Memories of Another Day (least favorite of the 3).

This story features Daniel Boone Huggins who was raised in a poor, sometimes violent, West Virginia household and then rose to become a feared head of a Labor union. As Big Dan fights for justice and power,  as well as his own fame and fortune, he sacrifices family and personal relationships for what he sees as the greater good.

The story begins after Big Dan has died and goes back to tell his story of his life and the story of the Labor movement over a period of some 50 years. The story outlines the struggles of low paid workers in the coal mines of WVA, working in unsafe environments prior to the union stepping in and looking out for these workers. This really gives readers a good overview of organized labor, and the violence and corruption which often gave unions a bad name.

I chose this one for a long road trip as I thought my husband might really enjoy it since he spent the majority of his career working for and with labor organizations. While slow in parts and unnecessarily wordy as well, this story had some exciting moments as well as plenty of sexually explicit parts.

Anyone interested in the history of the Labor Movement in the US will probably enjoy this book a bit more than me. My husband liked it more than I did but, neither of us felt it was worth 15 hours of our time.
Posted by (Diane) Bibliophile By the Sea at 12:38 PM