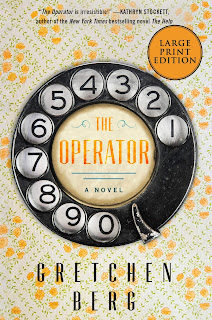 The premise of this novel really appealed to me:  small town, 1950's, nosy switchboard operator  and secrets exposed.

Set mostly in the 1950's (some 1920s), in the small town of Wooster, Ohio lives Vivian Dalton, husband Edward and daughter Charlotte.  Vivian works as a switchboard operator for Bell.  Although it's against company policy, one day Vivian listens in on a call of Betty, a woman who thinks she's better than everyone. What she hears involves Edward, Vivian's husband so she is shocked to say the least but, she's determined to get to the bottom of the rumor.

What I liked about the story was that it took me back to my childhood (born in the 1950s); we too had a party line and could listen to conversations of the other party although I don't think we knew who the other party was. I liked the small town references and happenings of those earlier times but, overall the writing felt choppy and slow. The (2) timelines were a tad confusing as well on audio.  Although I am not sorry I tried this one, overall it was somewhat disappointing. The audio narrator: Allyson Ryan did a good job. 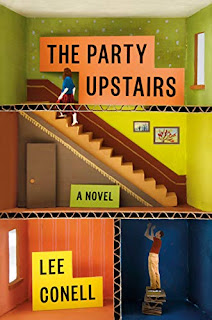 Set on the Upper West Side of Manhattan, where Martin, his wife Debra and their 24 year old daughter Ruby live in a windowless basement apartment where Martin has worked as the building's superintendent. For over 30 years he's catered to the needs and complaints of the building's elite residents. Martin's a hard-working but bitter man who likes to meditate each morning before things get busy in the building (he's on call 24/7)

As the story begins he has asked his daughter Ruby to join him in some meditation. She has an art history degree but is unemployed and has plenty of college debt.  She's about to interview for her dream job with the Museum of Natural History, while her affluent childhood friend, Caroline, who has lived in the penthouse apartment prepares for a big party that evening. Caroline is also unemployed.

Played out over the course of 24 hours, The Party Upstairs is an interesting look at social classes and the class divide. Some of the characters are arrogant and just plain obnoxious and others hostile and offensive. I also found the writing style a bit off-putting at times.  This is another book that I had high hopes for but, I ended up underwhelmed.

Posted by (Diane) Bibliophile By the Sea at 9:37 AM