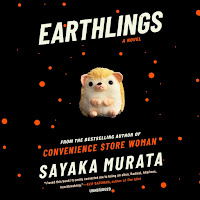 ONE SENTENCE SUMMARY:  Don't let the cute cover lead you to believe this is a light read; it's an unsettling story that you won't easily forget.

BRIEF REVIEW:   Earlier this year I read The Convenience Store Woman and absolutely loved it so I wanted to try the author's latest novel as well. This one was very good but a much darker story, however,  Sayaka Murata has become another favorite on my list of must-read authors.
Since the age of nine, Natsuki has always felt like a bit of an alien when it came to human interactions.  Her mother physically and emotionally abusive, her father devoid of emotion and both parents favored her sister.  She isn't even able to get her mother to take her seriously when she is sexually assaulted by a teacher.  Yet, Natsuki gets by pretending her plush, hedgehog toy,  Piyyut, has bestowed its magical powers to protect her.  One summer while the family has gathered for her grandfather's funeral at their mountain retreat, she learns that her similar age, male cousin Yuu also feels that same societal alienation and believes he has ascended from the planet Popinpobopia. The two bond over their similarities and the duo pledge to marry when older.
Fast forward 20 years and Natsuki is married to Totomoya and in a loveless marriage.  The two met on a website for "people trying to evade society's gaze."  It turns out Totomoya is disgusted by the female body because of abuse he suffered at the hands of his mother.  Pressured by the "Baby Factory" to procreate and the feeling that people are trying to brainwash them, Natsuki and Totomoya plan a getaway to that mountain retreat where Natsuki reconnects with Yuu hoping that he has not forgotten their childhood promise.  What occurs in the rather brief finale is likely to horrify the reader or, at the very least, have them jolt up in shock and never forget how this unsettling story ends.
Beautifully translated from the Japanese by Ginny Tapley Takemoti, the author has written another stunning piece about the pressures and consequences of being expected to conform to societies expectations.
RATING:  4.5/5 stars

"The person who had given birth to me said I was a dead loss, so I decided it must really be true."

"Society was a system for falling in love.  People who couldn't fall in love had to fake it.  What came first: the system or love?"

"I was a tool for the town's good, in two senses.  Firstly, I  had to study hard to become a work tool. Secondly, I had to be a good girl, so I could become a reproductive organ for the town."