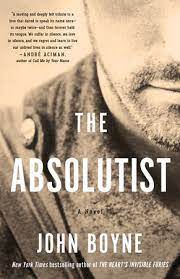 SOURCE:  sent to me by Other Press

ONE SENTENCE SUMMARY:  An unforgettable, beautifully written and heart-wrenching story about choices we make and the regrets that sometimes follow.

BRIEF REVIEW:   When this book was first published in 2012, I just didn't think it was a story for me but, was I ever wrong.
What is an "absolutist?"  We are told that when it comes to war, it is worse than being a conscientious objector. Not only does an "absolutist"  refuse to fight in a war they also refuse to perform ANY duties to help in the war effort like helping out on the sidelines or in a hospital for example.
The story begins in 1919 on a train with Tristan Sadler traveling to visit Marian, the sister of Will Bancroft, a very close friend of Tristans and fallen soldier.  The purpose of the visit is to return a stack of letters that Marion wrote Will during the war.  The two young men were briefly, intimately involved while serving in France.  While Will preferred to forget the incidents and made light of them, Tristan could not forget the encounters as he cared deeply for Will.
Many issues are covered in this beautiful story: family, courage, cowardice, friendships, pressures to conform, homophobia and more. Never do the issues overwhelm the storyline.  It's actually a simple story, yet masterfully written. Through flashbacks from 1919 to 1916 the reader gets a clear picture of what happened but, it isn't until you get closer to the ending that the real shock and impact of the story hits you.  The story ends with Tristan as an old man in 1979. This is a story I'll never forget.  I'm more determined than ever to read everything that John Boyne has written; his books The Boy in the Striped Pajamas,  and A Ladder to the Sky  were other books of his that have never left me. If you decide to read this book (please do) go into it blind, like I did and don't read too many reviews. The story is written in such a way that it does not give anything away too soon at least, you get just small pieces in just the right doses.  This would make an excellent book club discussion choice.  HIGHLY RECOMMENDED
NOTE: Thanks go to Other Press for sending this book my way in exchange for my unbiased review.

"Astonishing how everyone is willing to go abroad to fight for the foreigners while having such little concern for those of  their own countrymen at home."

" I think perhaps the adults we become are formed in childhood and there's no way around it."

"I felt that this is what it must be like to be married to someone, a constant back and forth of bickering, watching out for any stray comment in a conversation that might be corrected,  anything to keep gaining the upper hand, the advantage, bringing one closer to taking the game, the set, the whole blasted match without ever conceding a point."

Posted by (Diane) Bibliophile By the Sea at 9:00 AM

Email ThisBlogThis!Share to TwitterShare to FacebookShare to Pinterest
Labels: 5 star books, Books That I Loved, Other Press