Book Review - We are the Brennans; Tracey Lange 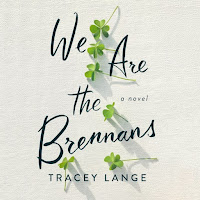 TITLE/AUTHOR:   We Are the Brennans;  Tracey Lange

ONE SENTENCE SUMMARY:  A family drama about an imperfect Irish Catholic family and the secrets the have tired to keep hidden.

BRIEF REVIEW:     The Brennans are a close knit Irish Catholic family but,  they are also a family with secrets, ones they have kept hidden from other family members and people they care about.

As the story opens twenty-nine year old Sunday Brennan wakes up in a Los Angeles hospital after being involved in a car accident while she was driving drunk. She is rescued by her big brother, Denny, a pub owner, who flies in from New York after learning about her situation.  It was five years earlier that Sunday left friends, family and her ex-fiancee more than a little surprised when she took off across the country. Now her brother has convinced her to return to New York to deal with her past and to get her life in order.

This was a well-written debut novel that unfolds from the perspective of each of the characters. The flow, even though there were multiple characters, worked quite well on audio and held my interest as well. This is just the type of story I tend to enjoy: a story about an imperfect, dysfunctional family and a slow reveal of the secrets they have been hiding.  Even though several of the characters were unlikable, it didn't matter as each characters were well-crafted and felt genuine and complex.  I especially enjoyed learning more about Sunday and why she felt compelled to flee.  Recommended for readers who enjoy stories about flawed families.

Thanks go to Macmillan Audio and NetGalley for allowing me early access to this book in exchange for my unbiased review. The audio book was read by Barrie Kerinik who did a great job.

Posted by (Diane) Bibliophile By the Sea at 4:40 PM