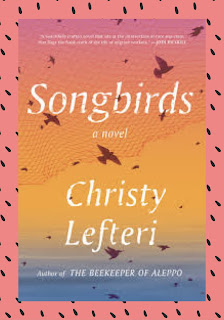 ONE SENTENCE SUMMARY:  A young woman leaves her native country, Sri Lanka hoping to provide for a better future for the daughter she leaves behind.

BRIEF REVIEW:     Nisha works as a housekeeper and a nanny for a wealthy widow and her daughter in Cyprus.  She left her own two year old daughter, Kumari with her mother in Sri Lanka in hopes that someday she could return home and give her daughter a better life. By day Nisha works as a domestic worker for Petra and cares for Petra's nine year old daughter Aliki. Although Nisha chats with her daughter via an iPad in the evenings, she is, for the most part, treated like nothing more than a servant by Petra.

Yiannis is a poacher who makes a lot of money by trapping tiny songbirds and sells them on the black market where they are considered a delicacy.  He lives on Petra's property and is also Nisha's secret lover. He longs to marry her and give her a better life but, poaching is a tough job to get out of once you are part of the illegal operation. Nisha hates what he must do to the tiny birds.

When Nisha goes missing one evening, after preparing dinner, early in the story,  it's Petra who begins her own investigation with the help of Yiannis. She begins talking with other migrant workers as when a migrant, especially a woman, goes missing in Cyprus, the police are not helpful.

I don't want to say too much more about the story except to say it is beautifully written, full of symbolism and imagery and just unforgettable, yet heartbreaking as well. The story in part was based on the true disappearances of other migrant women in Cyprus. There were some upsetting details involving how the poachers trap the tiny songbirds and what they do to them afterward.  Despite this, I'm so happy I had a chance to read this book. I now want to read the author's previous book: The Beekeeper of Aleppo which is supposed to be excellent as well.

Thanks go to Ballantine Books for sending me a finished copy of this thought-provoking book in exchange for my unbiased review.

“You see, when you clump people together and don’t understand their personal stories, you can make up any bullshit and convince yourself it’s the truth.”

“Now that I could hear this woman’s song—a melody that told a story I couldn’t understand—I hoped with all of my heart that it wasn’t too late.”

Brought up in London, Christy Lefteri is the child of Cypriot refugees. She holds a Ph.D. in creative writing from Brunel University, where she is now a lecturer. Her previous novel, the international bestseller The Beekeeper of Aleppo, won the Aspen Words Literary Prize and was the runner-up for the Dayton Literary Peace Prize. She is also the author of A Watermelon, a Fish and a Bible, which was longlisted for the IMPAC Dublin Literary Award.

Email ThisBlogThis!Share to TwitterShare to FacebookShare to Pinterest
Labels: 4.5 star books, Ballantine, Books That I Loved