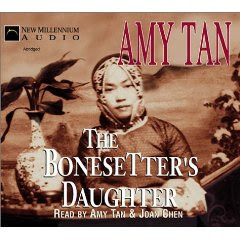 I will rarely reread a book because there are just so many other books out there that I really want to read. One book I really enjoyed in 2001 when I read it was Amy Tans: The Bonesetter's Daughter, and, since I needed a good audio book for a short trip, I decided to try this story one more time. I was not disappointed. The author and actress Joan Chen were co narrators of this audio book, and they did a flawless job alternating between the Chinese and American accents.

The Bonesetter's Daughter is a story about a mother and a daughter raised different cultures. Ruth is an American born Chinese woman, and her mother Luling was born and raised in China.

Ruth Young is a 40-something ghostwriter in San Francisco who periodically goes mute, a metaphorical indication of her inability to express her true feelings to the man she lives with, Art Kamen, a divorced father of two teenage daughters. Ruth's inability to talk is subtly echoed in the story of her mother LuLing's early life in China.

LuLing has always been a burden to Ruth, overbearing, accusatory, darkly pessimistic. Now, at 77, she has Alzheimer's, but she had recorded in a diary the extraordinary events of her childhood and youth in a small village in China during the years that included the discovery nearby of the bones of Peking Man, the Japanese invasion, the birth of the Republic and the rise of Communism. LuLing was raised by a nursemaid called Precious Auntie, the daughter of a famous bonesetter.

Answers to both womens' problems are revealed as the reader hears Luling's touching story of growing up in an orphanage.

One of my favorite passages:

These are the things I know are true:

My name is LuLing Liu Young. The names of my husbands were
Pan Kai Jing and Edwin Young, both of them dead and our secrets
gone with them. My daughter is Ruth Luyi Young. She was born in a
Water Dragon Year and I in a Fire Dragon Year. So we are the same
but for opposite reasons.

This was just a beautiful story, which demonstrates how we really are a product of the environment in which we were raised; how the past affects our future. I was especially touched by the mother/daughter relationship, as Ruth became involved in the care of her aging mother.

Posted by (Diane) Bibliophile By the Sea at 5:24 PM