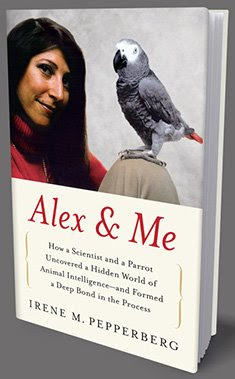 Alex and Me, an avian memoir was such a joy to listen to. The reader was terrific. The story was poignant and funny at the same time.

About the book - POSSIBLE SPOILERS

Partly autobiographical, Irene Pepperberg's memoir reveals info about her own life, starting with her lonely, bleak childhood where her best friend was a dime-store parakeet called "No Name."

The author was an overachiever. She was just 16 when she was accepted by (M.I.T.) Massachusetts Institute of Technology with her latest pet parakeet. After graduating, she earned her Ph.D. in chemistry at Harvard. But she found herself more compelled by the field of animal communication.

She chose African Grey parrots for her research because of their intelligence and clear speech. In 1976, the baby bird she named Alex — an acronym for Avian Language Experiment — was chosen at random from a cage in a pet shop.

When Alex died on September 6, 2007, it was a shock, because African Grey parrots generally live 50 to 60 years in captivity. His passing was devastating because Alex wasn't your normal, run-of-the-mill African Grey parrot; Alex was special. For the last 30 years, Alex had been the focus of research into the cognitive abilities of African Grey parrots. The goal was to see if Alex could "think", and he could!

Although his brain was no bigger than a walnut, when Alex died, he could identify 50 different objects, had a vocabulary of about 150 words, recognized quantities up to six and distinguished between seven colors and five shapes. More importantly, he had a grasp of concepts. He could tell you which objects were bigger, smaller, the same or different and why.

Alex would say, "I'm sorry," if he sensed that a researcher was annoyed with him. When he would get tired of his work and the questions, he'd say, "I wanna go back" (to his cage).

Alex and his owner developed a strong emotional relationship. When Alex died in September 2007, his last words to Pepperberg the day before were: "You be good. I love you."

I LOVE LOVED this audio book. There was just one thing that I was disappointed about. When Alex died unexpectedly at the young age of 31, they mentioned that they had a necropsy performed to determine the cause of death. Unfortunately, there was no mention of the results, which to me left unfinished business for the reader. Even if they were unable to determine the cause of death, something should have been mentioned at the end about this. Despite that, if you are an animal lover, be sure to give this book a try. I doubt that you will be disappointed.