33 - Hotel on the Corner of Bitter and Sweet; Jamie Ford 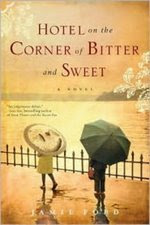 Hotel on the Corner of Bitter and Sweet: A Novel

, is a "bittersweet" debut novel about Henry Lee beginning in wartime 1942. Henry is Chinese and ignored by the white students at a Seattle elementary school. One day he meets Keiko Okabe, a Japanese American girl, and the two become immediate friends since they are the only Asians in their school at that time.

Henry's father makes him wear an "I am Chinese" button, which makes things even more difficult with his bully classmates in school, and also around town. His father harbors a hatred for Japan, and as a result, Henry tries to keep his friendship and love for Keiko a secret. When Keiko's family is sent to an internment camp, Henry promises to wait for her to return.

Some forty years later, Henry finds a crowd gathered outside the Panama Hotel. The Hotel was once the gateway to Seattle’s Japantown. The Panama Hotel has been boarded up for decades, but now the new owner has discovered the belongings of some Japanese families that were left behind when they were sent to internment camps during World War II. Henry notices something that looks familiar when the Hotel owner opens a Japanese parasol. Henry is certain that the parasol belongs to his long lost young love, Keiko. His love for her is rekindled.
The story shifts back and forth from the WWII years and 1986. Henry is now 56 years old, and a widower. He took an early retirement to care for his terminally ill wife Ethel. Also woven into the story is Henry's strained relationship with his son Marty. Marty does not know much about his father's past, but little by little he begins to piece together the puzzle of his father's past.

I thought Hotel on the Corner of Bitter and Sweet: A Novel

was a very good debut novel, there were parts when the story seemed to drag, but in the end I was I happy that I chose this book. A very satisfying read. This review is based on the advance reader copy I felt fortunate to have received.

Posted by (Diane) Bibliophile By the Sea at 7:06 PM