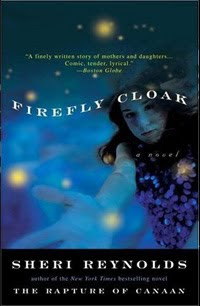 Sheri Reynolds totally blew me away several years ago when I read her fantastic book, and Oprah pick, The Rapture of Canaan. Anyone who has not read this book, MUST give it a try. So since I had another book on my shelf by this author for a few years, I thought it was time to try Firefly Cloak.

In Firefly Cloak, Tessa Lee is just eight years old when she and her four year old brother Travis are abandoned by their mother Sheila. Sheila leaves the children at a campground, when she decides to skip town with her boyfriend. In the morning, Tessa realizes her mother is gone, and all that remains are some of the children's clothes, and Sheila's "firefly cloak", which becomes Tessa's only link to her mother. When Tessa notices a telephone number written in black marker on her brother's back, she calls the number and finds out it belongs to their grandmother Lil.

After connecting with their grandmother, who takes the children in, the story jumps ahead seven years to a point in time, where the reader learns that the grandfather (Lil's husband) has died, and so has Travis. Not much else is said about what happened. When Tessa, now almost 16, learns that her mother is living just two hours away, she takes off to see her to tell her that Travis died. When she finds, Sheila, recognizes her voice, even though she is much skinnier, Sheila denies being Tessa's mother. Sheila is involved in the world of drugs and alcohol. Through flashbacks, the reader gets bits and pieces of the life of Sheila.

While I love coming of age stories and stories of dysfunctional childhoods, something missed the mark with this story. Although the story was good enough, I could not help but be disappointed by the way it failed to measure it to The Rapture of Canaan. I still recommend that if you like stories with elements of abandonment, loss, addiction, forgiveness and redemption, you just may want to try this one for yourself.

Posted by (Diane) Bibliophile By the Sea at 2:19 PM

Email ThisBlogThis!Share to TwitterShare to FacebookShare to Pinterest
Labels: Books That Were Just Okay, TBR Stack