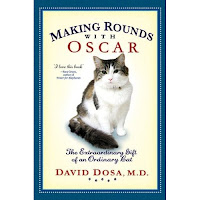 On July 27, 2007 Oscar the amazing cat who seemed to be able to predict the imminent death of patients at Steere House Nursing and Rehab Center in Providence, Rhode Island made the AP news . Oscar was a stray cat that began to wander the construction site of the current facility, and one day, shortly after the dedication ceremony, he decided to take a tour of the completed facility....."At first the staff tried to shoo the animal away, to no avail, each day the cat returned undaunted, through the lobby's sliding glass doors. His attitude was one of entitlement."  He was finally allowed to stay and named Oscar after the building's benefactor.

Oscar was not the only animal that resided at the nursing home. Steere House was unlike other nursing homes in the area. At Steere House, several cats, rabbits and birds resided there, and the residents seemed to enjoy having them there as well.  Oscar had not been a very sociable cat during his first year at the nursing and rehab center. He was not one to cuddle up to staff residents or family members. However, one day they found him laying on the bed, purring next to Mrs. Davis, a dementia patient. Dr.Dosa, who was not fond of cats, went to pet Oscar and he hit his hand with his paw refusing to budge from the bed. The doctor examined Mrs Davis, and then left the facility, and about one hour latter the nurse called Dr. Dosa to let him know that Mrs. Davis had passed away. The doctor could not believe what he was hearing; he just left his patent.

Mary, the charge nurse, told Dr. Dosa that this behavior and pattern of Oscars, was not new. In fact it had happened 5-6 times before. The patients were examined, no staff members sensed anything was wrong, and then Oscar would enter the room and sit vigil on the bed of the resident. After a few hours all of these patients peacefully passed away.  Suddenly doctors and staff took notice, as to who Oscar choose to visit, and it wasn't long before Oscar had created quite a stir. This ordinary cat instinctively seemed to know when the end of life was near.

MY THOUGHTS - I LOVED this book, and not just because I love cats -- it's full of beautiful quotes about cats, and the story just made me feel good all over. Dr. Dosa has written a book that compassionately addresses end of life issues. The stories he shares about residents and their families who must deal with such painful issues such as Alzheimer's Disease and other forms of dementia, and terminal illness, are tender and heartfelt. The book cites amazing examples of unexpected deaths, as well as miracles in other residents who had been expected to die. There is valuable information about hospice, and the book even touches on that expression "the sweet smell of death", and how perhaps Oscar, may have been able to smell elevated level of chemical compounds which are believed to be released as cells die off."  If you like to read tender stories about amazing animals, or need a touching, compassionate read about life, death and dying, this book will not disappoint you. Dewey the Small - Town Library Cat may have touched the world in 2008, but more over Dewey, Oscar is the cat everyone will be talking about in 2010. READ THIS BOOK it's AWESOME!  (5/5 stars)

Posted by (Diane) Bibliophile By the Sea at 8:11 PM