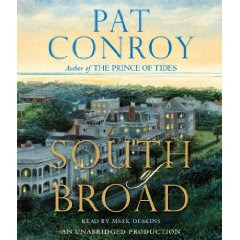 In Pat Conroy's first novel in some 14 years, the story begins in 1969 and spans some 20 years.  It is a story which takes place in beautiful Charleston, South Carolina, and is centered around some childhood tragedies.

The central character Leopold (Leo) Bloom King (named after James Joyce's Leopold Bloom in Ulysses), has been through a lot as a young boy. When he was just eight years old, his 13 year old brother Steve had commit suicide, and Leo found his brother dead in the bath tub.  The family is devastated by the suicide; Leo even spends time in therapy and a mental hospital as a child. Steve was the golden boy, the favored child of his mother Lindsay, a former nun, and now school principal, and his father Jasper, a high school science teacher.

The story jumps around a bit but begins in June of 1969, the summer before his senior year of high school Leo connects with some new friends, a motley crew, who will both improve and complicate his life over the next twenty years. These new friends, most of who are psychologically damaged like Leo in some way include: poor runaway Appalachian orphan siblings Niles and Starla, Twins Trevor and Sheba Poe, children of an alcoholic mother and a psychotic killer father, aristocratic siblings Chad and Fraser Rutledge, Chad's girlfriend Molly, a socialite, and Ike Jefferson, and African American, who was one of the first students integrated into the public school system in the 60s.

When the story moves to 1989, the majority of the old group still resides in Charleston except for Sheba, who is now a Hollywood movie star, and her brother Trevor. Sheba reconnects with the group to help her find Trevor, her gay brother who is missing and is believed to be in San Francisco. Although two decades have passed, the friends come together and help each other to heal some broken hearts in the process.

MY THOUGHTS - The audio version of this book was excellent and the credit goes to the reader Mark Deakins.  The writing is beautiful, the characters are real and easy to care about, and their stories are tragic. Nothing at all is predictable in this story,  the writing makes it seem almost magical. The author creates a marvelous sense of place with Charleston, and his love of the area is so evident in the writing. With themes such as racism, mental illness, sexual orientation, AIDS, suicide, division of class, love and loss, I think South of Broad would make an excellent book club discussion book.  RECOMMENDED  (4.5/5)

(The audio book I listened to was borrowed from my local library, but I also was fortunate to have received a review copy from Doubleday's Nan Talese - many thanks.)

Posted by (Diane) Bibliophile By the Sea at 6:43 PM

Email ThisBlogThis!Share to TwitterShare to FacebookShare to Pinterest
Labels: 2010 Reading Challenges, Books That I Liked